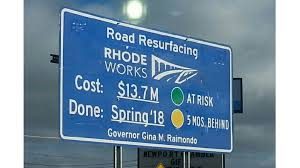 There are about 200 blue signs statewide that advertise RhodeWorks projects, yet the Rhode Island Department of Transportation (RIDOT) denied several requests via Access to Public Records Act (APRA) by John Vitkevich of Portsmouth, requesting information regarding sign cost, future locations and funding source. Mr. Vitkevich appealed to RIDOT Director Peter Alviti, a request that was denied. The matter is currently under review by the state attorney general’s office.

Mr. Vitkevich told the Portsmouth Town Council that he believes the signs “are a waste of taxpayers’ money, cause sign pollution and put drivers’ safety at risk. They’re ugly and they take up a a lot of good scenery in Portsmouth”.

The Portsmouth Town Council agreed and voted 6-0 to send a resolution to RIDOT requesting that all 16 signs in Portsmouth are immediately removed and that no future signs are installed. Council member Kevin Aguiar, who occasionally works with RIDOT abstained from the vote. Mr. Vitkevich also made the same request to the Tiverton Town Council and will speak with Middletown and Bristol Town Councils as well.

The RIDOT director stands firmly behind the concept of what his agency calls its “accountability signs” and how it shows taxpayers the cost and timeline estimates for the projects they’re funding.

RhodeWorks is the road-improvement funding plan proposed by Governor Gina Raimondo, for the repair of the state’s deteriorating bridges. The proposal would fund projects by borrowing $300 million against future federal highway funding and by refinancing old borrowing to yield an additional $120 million and by creating a new toll on large commercial trucks, which is expected to generate $45 million a year. The Senate Fiscal Office estimates the two initiatives would generate a net total of $543 million in new revenue for RIDOT between 2016 and 2020.