Is it necessary to pay property taxes? 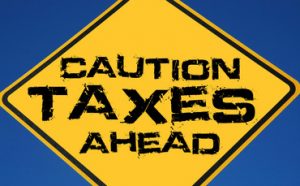 Mary Jane Harrington, the elected Treasurer/Tax Collector, was asked to attend the Budget Committee Meeting held on December 13, 2016, by the Town Administrator…she refused to attend, and said if the committee had any questions to have them contact the Solicitor, and handed Mr. Dunn a hand written list of 4 delinquent taxpayers. According to a lengthy report given to the committee on Ms. Harrington’s behalf, Mr. Dunn stated that to his knowledge, there are 5 additional delinquent tax properties, and that there have been no Tax Foreclosures on any of the delinquent tax properties.
The May 2016 Little Compton Tax Payers Association Newsletter states: ”$800K Burden: The Town is owed about $881,176 in delinquent taxes as of April 27, 2016. $340,845 of this is prior year taxes and $179,303 is for late charges including interest. According to the Treasurer/Tax Collector, “Prior years delinquent taxes excluding penalty (I waive interest to those on payment plans and those who have had a difficult time) amount to $340,844.75.” The Budget Committee was not happy with the Tax Collector’s refusal to attend the meeting nor were they happy with the lack of information provided to the Administrator. A motion was made to write a letter to Ms. Harrington demanding her presence at the January 17, 2017 Budget Meeting, with a copy of the letter to Town Council Members and Richard Humphrey, Town Solicitor.

Stay tuned for followup on just how the Little Compton Town Council and the Budget Committee will handle $762,402.26 in unpaid, uncollected property taxes.