Are 2017 events at Carolyn’s Sakonnet Vineyards in jeopardy? 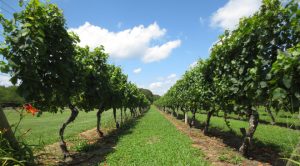 With neighbor complaints from Little Compton residents, the future of Carolyn’s Sakonnet Vineyards entertainment could be in serious jeopardy. The complaints date back to August of 2015, with neighbors complaining to the Town Council about increased noise, traffic and lighting during weddings and events at the Vineyard.

The 170 acre Sakonnet Vineyard was purchased by Alex and Ani LLC in 2012. The CEO stated that the vineyard “represents a major re-investment in our local Rhode Island economy and community.

During the summer of 2016, the police were called a few times for excess noise complaints. Chief Marion stated that “his officers have responded with mixed results. Sometimes the officers have not heard any excessive noise where on one occasion it seemed they did agree it was a little loud”.

Fast forward to the November 17, 2016 Town Council Meeting Minutes with Councilor Mushen reading the Zoning Officer’s opinion letter on the entertainment license applications of Dionysus Acquisition, LLC d/b/a Carolyn’s Sakonnet Vineyard, which states “Based on the above it is my opinion that the winery business is allowed at 162 West Main Road as a matter of right, but the weddings and concerts are not accessories uses to, and required for, the operation of the principal use and therefore are not allowed”.

The Solicitor recommended that the Council either take no action or deny without prejudice until the matter can be settled. A motion was made to “deny without prejudice two (2) applications for Entertainment Licenses submitted by Dionysus Acquisitions LLC d/b/a Carolyn’s Sakonnet Vineyard until issues raised by the Zoning Officer in his opinion letter can be settled”.

What does this mean for Vineyard events scheduled for 2017?  The Budget Committee was informed that the town will need approximately $150,000 to make it through June 30, 2017, the end of the fiscal year, which includes funds for “additional litigation”. Dionysus Acquisition, LLC d/b/a Carolyn’s Sakonnet Vineyard is also seeking zoning relief from regulations related to parking and requirements for a dust free surface, fencing and landscaping.

2017 is gearing up to be a year of litigation for Little Compton, it will be interesting to see how the courts rule on Right-to-Farm versus neighbor Right-to-Peace.