The newly elected Tiverton Charter Review Candidates are now official Charter Review Commissioners. Town Clerk Nancy Mello administered the oath of office to 8 out of 9 members that won a special election held July 18, 2017. Nancy Driggs is on vacation and will be sworn in upon her return.

Ms. Mello received official letters of resignation from three new commissioners that had previously held a seat on the Budget Committee…Jeff Caron, Donna Cook and Nancy Driggs. The first order of business was a motion called by Clerk Mello to elect a Chair. Bill Lopes made the motion to elect Rob Coulter, seconded by Jeff Caron and the motion unanimously carried 7-0 with Rob Coulter abstaining.

Chairman Coulter, as his first order of official business, made a motion to nominated Donna Cook for Vice Chair and Richard Rom for Secretary, seconded by Jeff Caron. The motion carried unanimously 8-0.

The commission discussed holding regular meetings every other Monday evening, perhaps in the Tiverton Library if available, and not in conflict with the Monday Town Council Meetings. The Chair took the action to explore library availability.

There was a lot of discussion on the best way to disseminate information between commissioners as well as how to track charter change proposals from the public and town commissions, boards and departments. Chairman Coulter will devise a system for the commission by the August 14 meeting perhaps via a proposal form and a spreadsheet for tracking. Chairman Coulter said public input will be welcome at all meetings. “We want as much public input as possible, there are a lot of great ideas out there.” he said. However, the discussions on using forms and spreadsheets were also to avoid wasting time and effort. “We don’t want anyone filibustering,” Commissioner Fougere said.

“Now that the election is over, we need everyone’s best ideas and input,” Commissioner Lopes said. “This is our Tiverton charter commission, it really isn’t one group or another. I don’t want anyone thinking anything is predetermined.”

The first of many meetings for the 2017/2018 Tiverton Charter Review Commission wrapped up after the exchange of ideas and suggestions on moving forward to complete the process within the next year. The Town Council will need to schedule public hearings and vote on all proposed changes from the commission by August 7, 2018 as the RI Secretary of State will need time to place the proposals on the November voter ballot 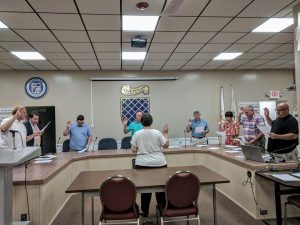