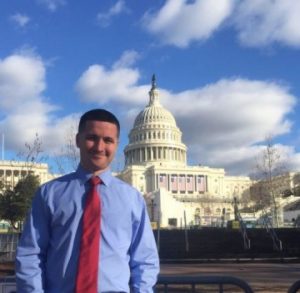 Chairman of the State Chairman Association is a position on the National Executive Board and a top leadership position among the committee.
The Convention will take place from Wednesday, August 2 to Sunday, August 6 at the Westin Hotel in Annapolis, Maryland.
The election is set for Saturday, August 5.

Rob Sullivan
In 2016, Sullivan, 30, of South Kingstown was voted the 2015 and 2016 Southern RI Young Professional of the Year.
Rhode Island voters also elected him in 2016 as Rhode Island’s youngest delegate elected to the Republican National Convention in Cleveland.
The Convention
The Rhode Island Young Republicans will be one of 40 young republican state organizations attending the Young Republican National Convention at the Westin Hotel in Annapolis, Maryland.
Rhode Island will be represented by 5 delegates, giving them full voting power at the national elections.
Also attending from Rhode Island are: RI Young Republican’s Chief of Staff Cory Pacheco, 20, of Johnson, URI College Republicans President Edward Tarnowski, 19, of Scituate, Hillary Costa, 24, of Cranston and Kevin Manuel, 26, of Bristol.
“We are extremely proud of the work the Rhode Island Young Republicans have been doing this year and couldn’t be more proud to be sending these five great, hard working young politicos to represent little Rhode Island on the national stage,” said RI Republican Party Chairman Brandon Bell.
Keynote speakers for the conference are Maryland Governor Larry Hogan, Annapolis Mayor Michael Pantelides, former RNC Deputy Chief of Staff William Greenier, and video greeting from RNC Chairwoman Ronna Romney McDaniel and Senator Tom Cotton (AR).
The group from Rhode Island will also be attending private tours of the White House and the Maryland State Capital.