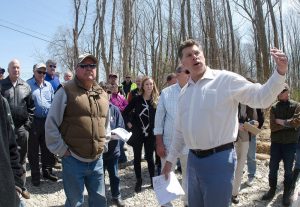 Visitors we encouraged to asked questions while walking through the still very undeveloped site. One visitor attending was Pocasset Wampanoag Tribe member Andrew Noronh with concerns for Native-American archaeology preservation. In a letter dated March 23 from Executive Director Edward F. Sanderson of the Rhode Island Historical Preservation & Heritage Commission (RIHPHC) stated that, “We would like to note that the larger project area, including the future access road and proposed round-about, as well as the footprint and associated utilities of the casino buildings, has the potential to be a sensitive area from both Native American and post-contact archaeological sites.” The West side of the property “may contain archaeological materials associated with the July 18, 1675 Battle of Pocasset,” a military engagement in King Philip’s War. Mark Russo, the Twin River casino representative stated that “Twin River has retained a consulting archaeologist, is meeting with state officials, and is taking responsibility for the surveying and handling of archaeological resources”

A blasting plan has yet to be developed, although Twin River Representatives gave assurances that various permits and approvals from officials would be obtained, as required by state law, from the state fire marshal and the Tiverton Town Council as well as notifying town fire and police officials. State law requires notification to neighbors up to 500 feet, however, Twin River said it will notify people up to 1,000 feet away. “Seismographs, videotaping, and dust controls will be used”, they said, with added assurances that blasting will occur with a 24 hour notice and only happen between 9 a.m. to 5 p.m., once per day.